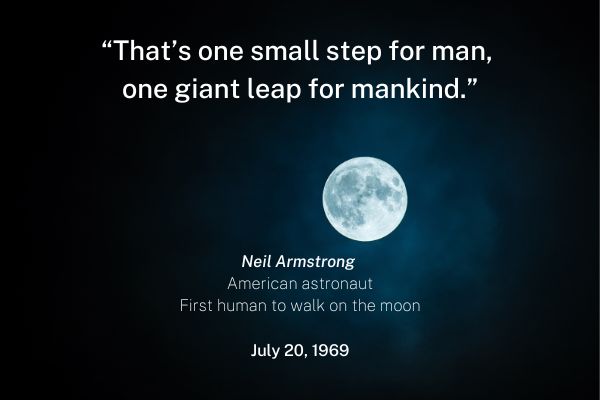 This Day in History

At 10:56 p.m. EDT, American astronaut Neil Armstrong, 240,000 miles from Earth, speaks these words to more than a billion people listening at home: “That’s one small step for a man, one giant leap for mankind.” Stepping off the lunar landing module Eagle, Armstrong became the first human to walk on the surface of the moon.

Read more of the story at History.Com

What Were You Doing When….?

The day of the first moon walk is one of the defining moments of the 20th century.  Anyone who is old enough to remember that day, knows what they were doing when Neil Armstrong stepped on to the surface of the moon.

I was young when it happened but old enough to remember the excitement and the tension on that day.  Everyone was watching the news and nobody really knew what might happen when Armstrong left the safety of the lunar module.  Around the world, everyone was glued to radios and television to witness the event.

At our home in St. John’s Newfoundlan, Mom, Dad and several neighbourhood families gathered  around the small black and white TV in the front room.  As well as all of the kids who had managed to stay awake because we were allowed to stay up way past our usual bedtimes to be part of history.

All watched breathlessly until confirmation that Armstrong was safely on the moon — and then everyone took a deep breath and went out to look at the sky in wonder.

The dream of putting a man on the moon, and bringing him back safely to earth, rose from a speech given by John F. Kennedy in May 25, 1961 – just weeks after the USSR had completed the first manned space flight.

That speech included the famous words:

I believe that this nation should commit itself to achieving the goal, before this decade is out, of landing a man on the Moon and returning him safely to the Earth. No single space project…will be more exciting, or more impressive to mankind, or more important…and none will be so difficult or expensive to accomplish…

Whenever I hear stories of Apollo 11 – or in fact any subsequent NASA achievements – I always am reminded of the story of JFK touring NASA in the 1962. As the story goes, JFK introduced himself to a janitor and asked what he did.  The response was, “I’m helping to put a man on the moon.”   and further is said that is the same response that everyone at NASA gave.

It is that clarity of vision and commitment at all levels that is claimed to be the reason that Kennedy’s seemingly impossible challenge was met within the decade.

A powerful lesson worth remembering on the day of this historic milestone. 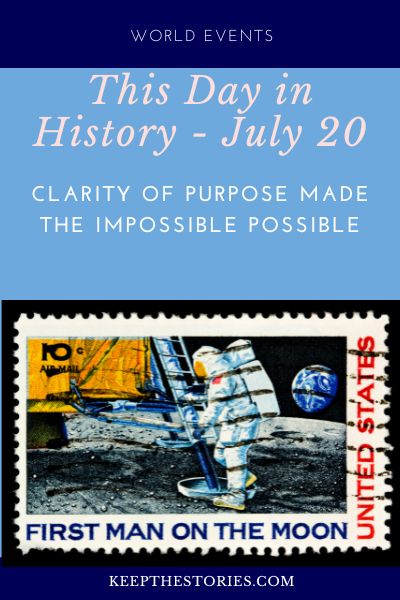 Are you old enough to remember the historic walk on the moon?  Where were you and what were you are doing?

If you are younger, what memories do you have of memorable events or discoveries related to space and space exploration?

What are your thoughts about the value of space exploration – and the resulting scientific advancements?

This site uses Akismet to reduce spam. Learn how your comment data is processed.