…and a small voice whispers, “they found us”.

In recent weeks, we have been hearing heartbreaking stories of the uncovering of unmarked graves on the sites of former residential schools. In some cases, this includes mass graves with more than one body buried.  We are mourning the children

May 27, 2021 – the Tk’emlups te Secwépemc Nation hired the services of a ground-penetrating radar team and confirmed what was already known. The remains of 215 children were buried on a former residential school site in Kamloops, British Columbia. “We had a knowing in our community that we were able to verify. To our knowledge, these missing children are undocumented deaths,” stated Kukpi7 Rosanne Casimir. “Some were as young as three years old.”

June 4, 2021 – 104 potential graves were identified by the Sioux Valley Dakota Nation at Brandon Indian Residential School in Manitoba.  Chief Jennifer Bone says, “We must honour the memory of the children that never made it home by holding the Government of Canada, Churches and all responsible parties accountable for their inhumane actions.”

June 24 – as many as 751 unmarked graves were located near the former site of Marieval Indian Residential School in Saskatchewan, associated with the Cowessess First Nation. “This was a crime against humanity, an assault on First Nations,” says Chief Bobby Cameron of the Federation of Sovereign Indigenous First Nations in Saskatchewan.

In the coming weeks, we are likely to hear of many more such finds.  Estimates vary as to how many children died in these schools.

The Truth and Reconciliation Commission Call to Action 75 states: “We call upon the federal government to work with provincial, territorial, and municipal governments, churches, Aboriginal communities, former residential school students, and current landowners to develop and implement strategies and procedures for the ongoing identification, documentation, maintenance, commemoration, and protection of residential school cemeteries or other sites at which residential school children were buried. This is to include the provision of Calls to Action| 9 appropriate memorial ceremonies and commemorative markers to honour the deceased children.”

Residential schools officially started with the passage of the Residential Schools act in the late 1800s  with the goal of assimilating Indigenous children.  They were designed to “kill the Indian in the child”.  More than 130 compulsory schools operated   Children were forcibly taken from their families to often remote locations where they were forbidden to speak their native languages, unable to connect with siblings, and subject to harsh, and inhumane conditions.  And we can not relegate these schools to the distant past.   The last official residential school closed in 1996 – less than 30 years ago!  The legacy to survivors and their descents is ongoing.  The loss of language and culture is extensive and much can not be recovered.  This is unquestionably a significant and deep loss to the Peoples and communities directly affected.  It is a loss to all Canadians.

I feel personally ashamed that I have not done more to learn about the extent of the damage of these school and their long and horrendous history.  But it no use to feel shame and sadness if it does not promote action.

It time that we fully acknowledge this disgraceful part of our history.  We can not continue to deny or disbelieve the tragedy that Indigenous communities have been telling us for years.  We must truly hear the stories and experiences of survivors, and ensure that those who did not make it home get back their names and history. We have to speak for those who can not.  We need to include this long, tragic episode in our school curriculum.  As Canadians, we must address this ongoing and systemic inequity and demand that our leaders and governments take action.

The Truth and Reconciliation Commission showed us the way forward with 94 calls to action. It is time to start acting on them.  Stand up and act.  Let’s together ensure that we do better for the survivors, and all the children buried in unmarked graves.

Advocate for the TRC 94 Calls for Action

The Truth and Reconciliation Final Report
The TRC Calls to Action

If you are Canadian, write your MP and demand action.
Find Members of Parliament

How to support survivors of residential schools

Learn More.  Donate what you can.

History of the Schools

The Horrors of St. Anne’s (CBC)

Mental Health Resources for former students and those affected

A National Indian Residential School Crisis Line has been set up to provide support for former students and those affected. Access emotional and crisis referral services by calling the 24-hour national crisis line: 1-866-925-4419. 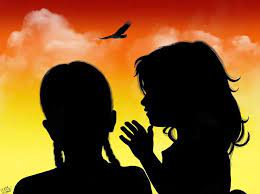 They Found Us, a drawing created by Whitney Gould of We’koqma’q First Nation, incorporates an eagle, traditionally the one animal that can soar to the spirit world, and an orange sunset to represent the spirits of the 215 children found at a B.C. residential school making their way to the spirit world.