Sometimes you have to move on

For many years, I have wanted to restore an old trunk.  Several years ago, I picked up one that had be thrown out with the trash.  It was in decent shape and I took it home with the best of intentions to either restore it to a measure of its former glory or create something new and creative with it.  I was sure if I couldn’t find a space and use for it in my home, I could sell it and at least recoup costs – all while learning some new skills.

I didn’t have time or space for that project where we living at the time but we were in the processes of packing for a new home with a planned workshop.  The trunk went into our project pile.  Where it sat.  It was moved several times when we relocated, needed space, even when we had a flooded basement. And still it sat and sat.

I purchased some supplies including a suitable paper liner for the top tray.  I did some research on best strategies.  I even looked at ways and places for selling.

But I had reasons (excuses) that I couldn’t get to it – no room in the shop for the project, lacking the proper tools, not confident about where to start.  And all the while it almost taunted me as an unfinished project that was not progressing.

Last Fall, I decided that I had been keeping this around taking up space for too long.  It was time to let it go and move on to other things.  Two factors that sealed this decision:

Finally making that decision allowed me to set this aside, albeit with some lingering resistance.  Doing so would give me more space to work on other projects, tell other stories.  I still have an interest in this project  but when and if I decide in the future to finally tackle my goal for a trunk restore, I am sure that I can find another one.

I considered trying to sell as-is but that would have taken time and didn’t want to reradd to my list or have it continue taking up space.  So, I emptied out and took it out to the road on Curbside Give Away Weekend, when people put out furniture, equpiment, toys and more out for free pick-up.  Some time during the weekend, it was taken away to a new home for someone else to use or restore. 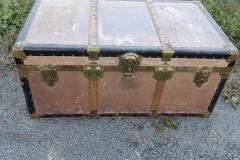 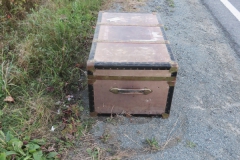