Yet again in these troubling months, I don’t know where to start, what to write – even how to think. This has been a disturbing and frightening few days. On May 25, George Floyd, a 46-year-old black man was killed by police in Minneapolis. The arresting police used force well beyond anything even remotely indicated by the situation, including pinning down Mr. Floyd with a knee to the neck for almost 9 minutes leaving him unable to breathe. There were many witnesses and the events were captured on multiple devices (like this cell phone video – warning that this video is very disturbing). Mr. Floyd and bystanders can be heard calling for help and he clearly states that he can’t breathe.

Since then, there has been so much to follow. The 4 police offers were fired. One has been charged with 3rd-degree murder. As yet, no charges against the other three, although there are calls for more to be done

Peaceful protests have been taking place around the US and in other countries. Some have turned to violence but in many areas, people of all races and backgrounds are joining forces and peacefully but forcefully saying that change is overdue. In many areas, police officers are putting down their riot gear and walking with protesters, supporting their call for justice.

In Some Cities, Police Officers Joined Protesters Marching Against Brutality

At a time when the US needs a leader attempting to bring people together, Trump is threatening to escalate violence and urging governors to show force and shut down demonstrations.

LIke many, I feel helpless and unsure of how to act. I am a white woman living in relative comfort in a safe community. I can not claim to understand what it is like to fear being stopped or arrested or threatened – or even being killed – because of the colour of your skin. I have always tried to speak out against individual instances of racism or discrimination but that is not enough. People being discriminated against by the system are not the ones with the power to change.

Clearly it is time to recognize that white privilege is a thing, even if you don’t feel you have privilege. One thing that I have heard in discussions this week is that white privilege means simply that you might be white and still have lots of problems and not feel privileged but you are because of basic opportunities. Fundamentally, it means that you still have problems but the colour of your skin is not something that makes your life more difficult.

Black and Brown people have been telling us for years that this is their experience. Is it any wonder that people angry? The protests and escalations of this week are not sudden or happening out of nowhere. They are part of a progression.

Too many of these police incidents have happened because of unfair and unbased biasis and assumptions. We know the names. Most recently, Breonna Taylor and George Floyd. Always there is immediate outrage and action but then the news cycle changes and the ingrained problems remain and build up under the surface, unseen until the next tragic and unnecessary death.

We can not continue to accept this being dismissed as ‘a few bad apples’; it is systemic and the systems need to change. We can not let it stay hidden and convince ourselves that it doesn’t exist.

COVID-19 has had a major impact around the work but it is disproportionately affecting Black people, often because of limited healthcare resources as a result of higher rates of poverty, also resulting from impacts of systematic racism. This too is a symptom of a system that has to be addressed.

Be Part of the Change

Get informed. Ask questions. Have difficult conversations. Most importantly, LISTEN. Then act. Some places to start.

Learn how we got Here

Trevor Noah used his platform of the Social Distancing Daily Show to try and process recent events with a thoughtful talk on George Floyd and the Dominos of Racial Injustice, a piece that has been widely shared and assigned in many virtual classrooms.

Read powerful opinion pieces like this one by Kareem Abdul-Jabbar in the LA Times: Don’t understand the protests? What you’re seeing is people pushed to the edge

My White Friend Asked Me on Facebook to Explain White Privilege.

For our White Friends Desiring to be Allies

Be aware. Examine your behaviour. Do not practice or accept ANY of these thoughts or actions.

Educate, speak up, donate: what you can do right now to support Black Lives Matter.

How to be an ally for Black lives

The dominating presence of racism, with its harmful effects on both mental and physical health, has been an undeniable reality for Black people for centuries.

No single right way to be an effective ally, says Black Lives Matter activist — but there is a wrong way

The support people say they show for the Black Lives Matter movement online has to translate to the real world, says Winnipeg activist and spoken word artist Chimwemwe Undi.

How to be a good ally

Listen and Learn – Take Responsibility – Acknowledge your Privilege – Speak Up — and remember you don’t get to call yourself an ally. 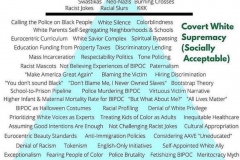 Understand why All Lives Matter is Damaging

Read an interview with Professor Olivette Otele , an expert in the History Of Slavery that Explains The Mistake In Saying ‘All Lives Matter’

It is up to everyone to learn more and contribute to solutions. Each one of us needs to stand up and take responsibility. We need to do better. We need to BE better.